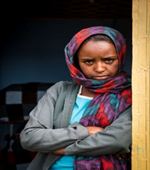 Debre Berhan is located130 km from Addis Ababa. It is the capital town of North Shoa Zone in Amhara Region with an estimated population of 94,829, of which 50,259 (53%) are female. Many ex-soldiers and displaced people from the north settled in the town following the war to overthrow the Derg regime. Many families are headed by women who lost their husbands in the war. Average incomes in the area are very low, often no more than 500 Bir ($25 CDN) per month.

As a result of the economically precarious situation in the area, community members, especially girls, have been exposed to various types abuse, including sexual abuse in the form of forced prostitution, rape and labor exploitation.
The poor economic outlook has also led to a voluntary movement of young girls and boys to urban centers in search of a better life. They often encounter miserable, dangerous lives on the street.
A large percentage of the children who remain in Debre Berhan fare no better. Many are raped or forced into unsafe sex, which often results in unwanted pregnancy, HIV/AIDS, STDs and chronic emotional and physical problems.
Debre Berhan serves as waypoint between Addis Ababa and several other urban centers. Every year, hundreds of abused and trafficked children are transported through the city on their way to a final destination. The situation demands a community-based child protection program to alleviate the multi-faceted problems of the abused and vulnerable children.
EDA has been implementing integrated community-based projects in the area since 2001: These projects include:
• Education
• Child Protection
• Youth Livelihood Project